The volcanic eruption of both scholarly and layman’s arguments on the implication of the President electing to dishonor the invitation/ summon of the National Assembly and more precisely the House of Representative calls for judicial intervention on the true position of the law as regards that. 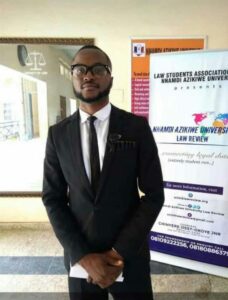 Nevertheless It is a duty on me to  submit that Mr. President did not err at law in disregarding such invitation as there exists deep seated lacuna in the constitution in mandating the president to honor the summons or invitation of the National Assembly. As a matter of fact it is non hyperbolic to emphatically state that the attendance of the president to address the joint house on the state of the nation is at the unfettered discretion of the president. A painstaking and communal perusal of the constitution allays every conceivable scintilla of doubts on this matter.

You can Click Here To Apply For Xmas Loans

The relevant provisions of Sections 67, 88, 89 and 308 of The Constitution of the Federal Republic of Nigeria herein after referred to as the Constitution is instrumental in this wise.
For clarity reasons I shall reproduce the provisions of the aforelisted sections.
Section 67(1) on it’s part provides that; The President “May” attend any joint meeting of the National Assembly herein after referred to as NASS or any meeting of any house of National Assembly, either to deliver an address on national affairs including fiscal measures, or to make such statement on the policy of government “as he considers” to be of national importance.
Section 88 on its part provides; subject to the provisions of this constitution, each house of the national assembly shall have power by resolution to direct or cause to be directed investigation into;

The following:
A) any matter or thing in respect to which it has power to make laws, and
B) the conduct of affairs of any person, authority, ministry or government department charged or intended to be charged with the duty or responsibility of,
I) executing or administering laws enacted by National Assembly
Section 89(1) provides that for the purpose of any such investigation under section 88 of this constitution and subject to the provisions thereof, the Senate or house of Representative or a committee appointed in accordance with section 62 of this constitution

Shall have power to

A) procure all such evidence, written or oral, direct or circumstantial as it may think necessary or desirable and examine persons as witnesses whose evidence may be material or relevant to the investigation.
Section 308(1)(b) “Notwithstanding” anything to contrary in this constitution but subject to subsection 2 of this section
B) a person(President in this case) to whom this section applies shall not be arrested or imprisoned during the pendency of his tenure of office either in pursuance of the process of court or “otherwise”

A collective construction of the aforestated sections unequivocally leaves no stone unturned on the fact that the honoring of NASS invitation or Summon on issues of stats of the nation/defence matters is entirely within the discretion of the president. This indeed is a huge latitude but the law is the law and it is as strong as the Rock of Gibraltar and remains binding until amended or repealed.
The use of the words “may” and “as he considers necessary” in Section 67 presupposes discretion and not an obligation and to hold otherwise will be tantamount to a misdirection of law.

Also in the wordings of sections 88 and 89, it is not contained there in anything suggesting that the national assembly reserves the right to summon the president. What is merely contained is that the two houses can conduct investigation on such matters within its jurisdiction as such the president is a competent but non compellable witness in any proceedings of the National Assembly. It then means that the National Assembly or a committee duly appointed in accordance with the law can visit the president in Aso rock and investigate him on such matters.

It is noteworthy that a summon is an “order” demanding the appearance of any person before a body in exercise of it’s adjudicatory or administrative duties and as such a summon must be backed with a sanction in the form of an arrest in the event of contravention by a summoned party. In respect of this it is of instructive necessity to posit that section 308(1)(b) of the constitution expressly immunes the president from arrest or imprisonment to be carried out in pursuance of a court process or otherwise(national assembly summon) this is because the President represents the statehood and sovereignty of Nigeria.

Another argument that can be put forth in support of this position is that issues of national defence are of massive confidentiality and as such classified information’s shouldn’t be laid rather too prostitutionally open to the prejudicial eyes of the public. By section 9 of Official Secrets Act; classified information’s such as national defence shouldn’t be made open to the public.